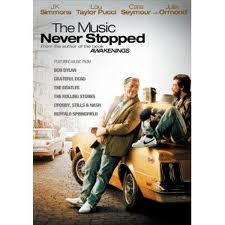 My Review,
You know, I really enjoyed it. The music was wonderful, and the acting was great! The Music Never Stopped is a true story that grips the hearts of anyone who's struggling to understand their children-or children their parents. It takes the fact that every one interacts differently and intensifies it. In this film it's either communicate how they understand, or don't communicate at all. Lou Taylor Pucci is one to watch, and J.K. Simmons gave his usual fantastic performance. I think some could argue who was right in this movie, should they have stuck it out, or changed? But I think really the point of the film is not political or any sort of hidden agenda, but really I think it's about accepting each other, and loving each other, always.

To sum it up, I would recommend it to people who like Billy Elliot and Listen to Your Heart, and Juno.
Posted by Cole at 16:46