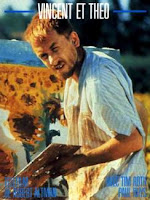 I'm going to start by giving you some film stats, about the plot, then go into my review. *WARNING - THIS MAY CONTAIN SPOILERS*

Plot;
Theo (Rhys) is always having to look after his older brother Vincent (Roth), who always seems to go crazy just when Theo was starting to get every thing normal again. This is the story of the adult-life and death of famous painter Vincent Van Gogh, and his brothers trials of trying to take care of a not-so-sane older brother. Though he loves his brother Theo, a curator, Vincent can't seem to control how he acts, with his fits of rage and sadness. This ultimately leads to Vincent killing himself, and Theo dying not even a year after.

My Review;
I love Biographies, knowing that some one out there at some time lived what you just saw. It's not emotions that are made up, theses things really happened. Though I love them, there is a part of me that hates biographies, because you know that when some one takes their life, like Vincent Van Gogh did, it really happened. You can't watch the alternate ending on the special features DVD, because there was no alternate ending, that's what really happened. The movie had some language, but what you would expect from a Mentally-Ill, Erratic painter. It also had some nudity, though if you watch it on television most of it is edited out. This movie's kind of hard to put your finger on. I think that Tim Roth was wonderful as Vincent, it was like you were looking back in time, through a window in the clouds. It was truly a great performance.

To Sum it up, it was interesting and a little disturbing.
Posted by Cole at 22:07